Last weekend I was cutting it close, taking a couple hours on Friday to go see the Go West! exhibit that ended Sunday. This was an amazing collection from the Buffalo Bill Center of the West showcased at the newly renovated UMFA (Utah Museum of Fine Art) building. 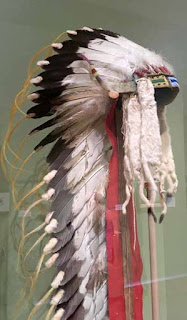 The exhibit had paintings, and also Native American bonnets, bags, and clothing. I was amazed as always by intricate bead work and quill work. 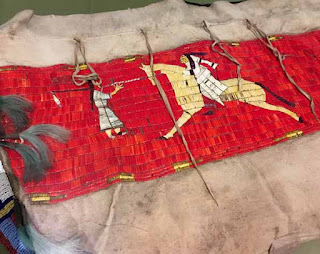 Design made with porcupine quills on a bag 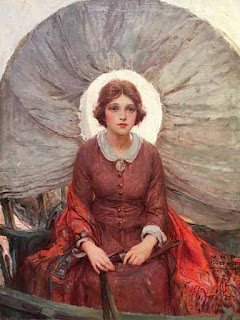 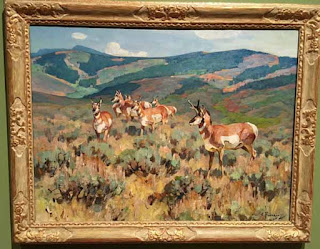 Carl Rungius' In the Foothills (Antelope)

As I moved through the collection reading the titles and descriptions of the art, I paused by one of Frederic Remington's works. The title of the painting is The War Bridle and the piece was completed late in the artist's career, in 1909. The sign by the painting read in part:


Critics praised this picture for Remington's new style and remarked that it would secure the artist's reputation as a true American painter rather than as a mere illustrator. 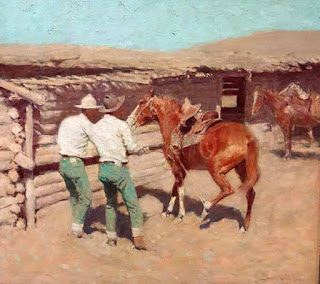 It's a beautiful painting, and it has a more impressionistic feel than Remington's typical realistic style. However, I was taken aback that the body of work he had been producing for years was, in the critic's view, not what made him a "true American painter." Apparently, everything else he produced was "mere illustration." Let's take a look at another painting by Remington. 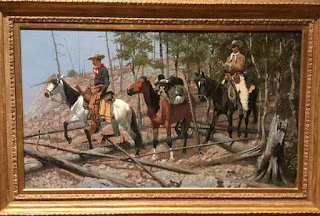 Prospecting for Cattle Range was hanging on the wall around the corner. It was a privately commissioned piece Remington painted nearly twenty years before The War Bridle. Is it any less the work of a true American painter? 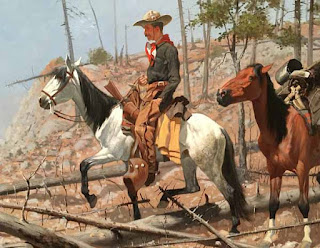 Remington's skill in composition, drawing, and painting are all visible here. The exhibit also had one of Remington's sculptures. His poses in sculpture are dynamic, gravity defying, and beautiful from any angle. Was not his ability in drawing, painting, and sculpting what made him a true American artist? Funny to read a perspective that without his change of style, he was viewed at the time as a mere illustrator. As if illustration is not art.

Go West! was a wonderful exhibit, and I am glad I had the opportunity to see it. If you missed it, maybe you'll get a chance to go to the Buffalo Bill Center of the West in Cody, Wyoming to see these, and many more pieces of art.

More of Remington's art can be viewed here.