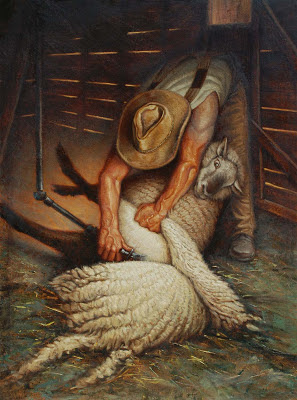 It must be nice to be a sheep
With nothing to do but graze and sleep.
But when it's time the wool to shear,
That poor old sheep bleats, "Oh, dear!"
--Langston Hughes

It is springtime, shearing time, and National Poetry Month.  What better way to celebrate than with this great little poem by Langston Hughes, a truly talented American poet!

Thanks to Greg Newbold for permission to use the image of his amazing painting, "Unburdened."
For more about the creation of this painting, visit Greg's blog here. 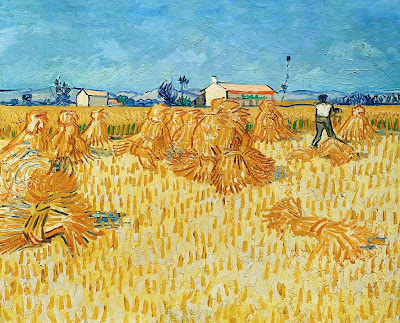 Billy Collins was America's Poet Laureate from 2001 - 2003.  I became a fan of his poetry during his appointment as Poet Laureate.  His poems are very approachable, and I would have a hard time choosing a favorite.  Here is one you might enjoy (from Sailing Alone Around the Room).

Every day the body works in the fields of the world
mending a stone wall
or swinging a sickle through the tall grass--
the grass of civics, the grass of money--
and every night the body curls around itself
and listens for the soft bells of sleep.

But the heart is restless and rises
from the body in the middle of the night,
leaves the trapezoidal bedroom
with its thick, pictureless walls
to sit by herself at the kitchen table
and heat some milk in a pan.

And the mind gets up too, puts on a robe
and goes downstairs, lights a cigarette,
and opens a book on engineering.
Even the conscience awakens
and roams from room to room in the dark,
darting away from every mirror like a strange fish.

And the soul is up on the roof
in her nightdress, straddling the ridge,
singing a song about the wildness of the sea
until the first rip of pink appears in the sky.
Then, they all will return to the sleeping body
the way a flock of birds settles back into a tree,

resuming their daily colloquy,
talking to each other or themselves
even through the heat of the long afternoons.

Which is why the body--that house of voices--
sometimes puts down its metal tongs, its needle, or its pen
to stare into the distance,

to listen to all its names being called
before bending again to its labor.
---Billy Collins 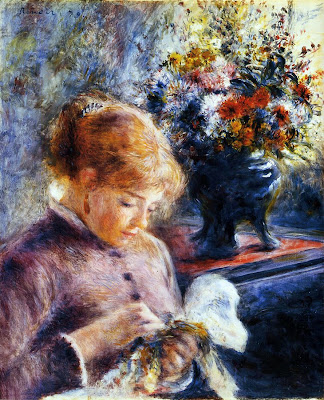 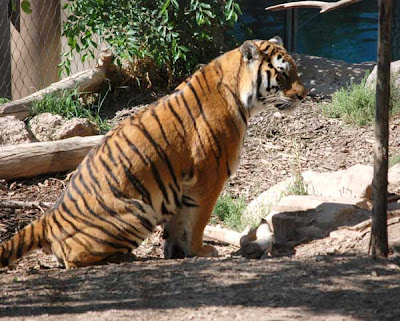 I heard the purpose of National Poetry Month (April) is to celebrate American poets.  I appreciate that, however, I am taking the position that I can use this month to promote poetry in general.  Please don't be offended by my use of poets of other nationalities, just take the opportunity to celebrate some great poems.  Enjoy!

Tyger! Tyger! burning bright
In the forests of the night,
What immortal hand or eye
Could frame thy fearful symmetry?

In what distant deeps or skies
Burnt the fire of thine eyes?
On what wings dare he aspire?
What the hand dare seize the fire?

And what shoulder, and what art,
Could twist the sinews of thy heart?
And when thy heart began to beat,
What dread hand? and what dread feet?

What the hammer? what the chain?
In what furnace was thy brain?
What the anvil? what dread grasp
Dare its deadly terrors to clasp?

When the stars threw down their spears,
And water'd heaven with their tears,
Did he smile his work to see?
Did he who made the Lamb make thee?

Tyger! Tyger! burning bright
In the forests of the night,
What immortal hand or eye,
Dare frame thy fearful symmetry? 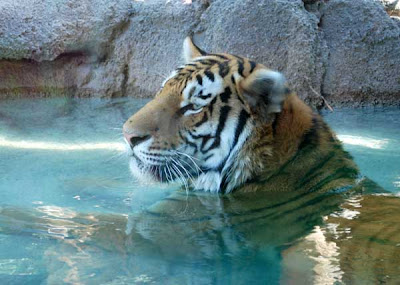 Tiger in the water at Hogle Zoo. 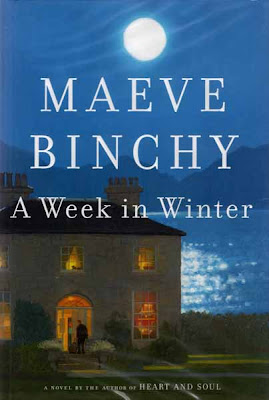 I first became acquainted with Maeve Binchy's work many years ago when I was reading a memoir by Barbara Bush.  Mrs. Bush was a big fan of Maeve Binchy, and after reading about Binchy's novels, I decided to try one.  I was instantly a fan.  Binchy's work has let me live on Tara Road and meet a whole new Circle of Friends (the book is much better than the movie).  I have studied Italian in an Evening Class and spent Nights of Rain and Stars in Greece.  I have attended a Silver Wedding and stood under a Copper Beech.  Through Binchy's novels I have eaten at Quentin's and been to events catered by Scarlet Feather.  This amazing Irish author consistently crafted wonderfully companionable novels that occupied me for many an hour. 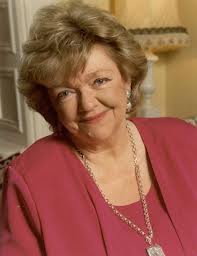 Maeve Binchy passed away in July 2012.  I was sad to learn of her passing, and didn't write about it at the time as I was recovering from cancer surgery, but I have thought of her and her contributions to my library many times since.  I recently read her last novel, A Week in Winter, and it does not disappoint.  This final book is Binchy at her best.  Main character Chicky Starr falls in love and leaves Ireland to go to America with her lover.  When the relationship ends, Chicky can't face telling her family back in Ireland the truth.  She remains in New York, gains work experience, and tells the family back home about her married life in America.  Years later, when the facade threatens to come crashing down, Chicky lets everyone know her fictitious husband has died, and she returns home to Ireland.  There she takes on a wonderful old home, and converts it to a holiday retreat called Stone House, offering a week of vacation on Ireland's Atlantic coast.  In succeeding chapters, Binchy introduces a wonderful cast of characters who come to stay for the opening week.  In another author's hands, telling the stories of so many people could be clumsy at best, and fail to move the book along.  Not so under Binchy's experienced, talented hand.  A Week in Winter was a treat from start to finish, and I will vacation at Stone House in Ireland again and again.  The storylines of the different characters weave together seamlessly in this last work, in the way only Binchy could do so well.  Maeve, you will be missed!  Thank you for a last, wonderful read.

This wonderful quote is on Maeve Binchy's website, and I have included a link to her site here. If you are not acquainted with this best-selling author, you might want to put her on your summer reading list.