Gymnastics and Other Life Skills 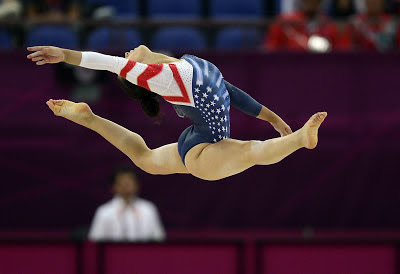 I don't agree with the philosophy that "everything I needed to know I learned in kindergarten."  However, I have learned that skills I acquired years ago and never thought I would use again come in handy in unexpected moments.  Let me give you an example.

When I was in a junior high PE class, I had to complete a unit on gymnastics.  Every girl in the class had to "test" on a combination of  bars, floor, vault, or balance beam. Now, my grades were really important to me, and I wanted to be successful in this class, but it became clear early on that I possessed neither the gymnastics experience nor the physical gifts necessary to succeed on the different apparatus.  My upper body strength wasn't good enough for bars.  Vault was a joke.  That left me beam and floor.  I had some rudimentary tumbling skills (I could do a cartwheel, a somersault, a backbend, etc.) and I had decent balance, but my hopes of an "A" grade in this class were fading fast.  The beam routine I thought I could master involved simple steps, one "leap" where my front foot and back foot traded places, simple turns, etc.  One skill on the list was a "knee scale."  I had no idea what that was.  So, summoning all my 8th grade courage, I asked my gym teacher how to do a knee scale.  When her verbal explanation failed to make sense to me, she offered to demonstrate it.  Placing one knee and lower leg on the beam, she raised her other leg straight out behind her, and attempted to lift her arms off the beam.  She immediately lost her balance, and made a comment to me like "you get the idea," and that was the end of my gymnastics instruction.  However, a light bulb went off in my head.  If I could master a knee scale, maybe I could pull a decent grade in PE after all!  On test day, I balanced on the beam in a knee scale, arms outstretched, and completed the rest of my beam skills.  A gymnast I am not, but the PE teacher gave me an "A" for being able to do something she couldn't!

Girl demonstrating a knee scale.  I had to do one lifting my arms off the beam.

Fast forward MANY years later.  I have never needed a knee scale as a life skill until now.  I broke my ankle a couple weeks ago, and am zipping around my home on a knee scooter.  The position of my leg on the scooter is similar to that of my leg on the beam in a knee scale.  When I get out of the shower and am drying off, I find the ability to balance on a knee on the scooter to be quite useful.  Who knew I would be doing a variation of a knee scale in adulthood?  (Now, I am not sure balancing on a knee scooter is a recommended usage, but there are times when it comes in handy.  I recommend locking the brake if you do this at home.) 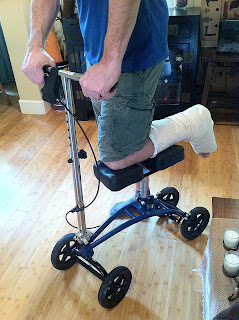 What are some skills you acquired in childhood that have been surprisingly useful to you as an adult?
Posted by Amy at 2:31 PM 2 comments: